Research projects on a dolphin population in Panama City, Florida

Even if the wild dolphins of Panama City are considered as “friendly” because they approach boats and swimmers, it would be premature to say that the human/dolphin interaction benefits both sides.

Since scientists have not yet been able to systematically monitor the life of the wild dolphin population in the Panama City area, we cannot measure the full effect of their interactions with humans and we cannot qualify it either because even though several groups of scientists have tried to assess the composition, size, health status/level of stress of the local population, it is practically impossible to monitor or even to identify a whole population in this area as would a consistent study require since the animals are in constant motion in a very large geographic area.
What is certain is that the local human community in Panama City is benefiting financially from the interaction with wild dolphins because almost every recreational and tourist oriented business is using them as an attraction. This brings about a very important question for our community: how do we make sure that dolphins are being allowed to strive and flourish so that they can continue to be an asset to this area?
At Water Planet since 1995, we have been trying to find that fine line between inter-species exchanges and harassment.

No consistent research has been published so far about the impact on the Panama City wild dolphin population of human activities, both industrial and recreational. Until such data is available, it is very difficult to select and to apply conservation strategies.

Some of the adverse conditions resulting from industrial activities could be silting of the St. Andrews Bay waters and algae blooms causing grass beds die offs by lack or limitation of photosynthesis. Typically, deforestation would be the origin of this problem. 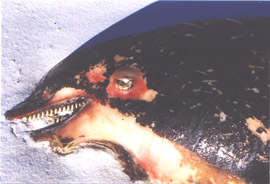 Pollution by toxic runoffs could also be a problem in our bay waters. We have several important industrial plants right by the bay, east of town. Sewer lines leaks or ruptures and agriculture fertilizers runoffs are also a serious concern. Residential and commercial developments by the bay disrupting the natural seashore (Spartana grass being an efficient natural filter for runoff waters) could also be responsible for drastic changes in the bay water chemistry promoting algae blooms.The Friends of St. Andrew Bay  is probably the most reliable source of information as far as data on the St. Andrews Bay marine eco-system.
Dolphins are an excellent indicator of the health of their (and our) environment because just like us, they are at the top of the food chain. Their fatty tissues store toxic elements like PCBs and heavy metals.

Even though in our opinion, the problems described above are much more serious and threatening then the impact on wild dolphins resulting from the interaction with recreational activities like boating, sports fishing, swimming and snorkeling, the nature of Water Planet’s programs is limiting our area of expertise to the latter field.
Consequently, since 1995, Water Planet has looked for and actively encouraged and supported projects focusing on the effects of human interaction with wild dolphins, on bottlenose dolphin population assessment, distribution, photo identification and behavior in our area.

In 2004, Wanda Jones, a University of Florida doctoral researcher, has published the only serious study focusing on the interactions between wild dolphins and humans in our area: “Wild Bottlenose Dolphin Behavior And Interactions With Humans In The Nearshore Waters Of Northwest Florida.” This study can be obtained with UMI Dissertation Services. This particular research looked at the behavioral ecology of all the dolphins that could be found inhabiting the Bays and Gulf of Mexico waters up to 3 miles offshore from Cape San Blas to the western part of Choctawhatchee Bay in Destin. Data collected included habitat use, population distribution and abundance of dolphins within the study area, movement patterns, pod associations, and behaviors exhibited by dolphins habituated to human presence and those that are not habituated/interested in contact with humans. A behavioral activity and time budget was created for the dolphins observed in the abovementioned study area.
This comprehensive study, considerably improves the understanding of the Panama City wild dolphins and of their interactions with human activities.

Two European universities have sent several marine biology students to Water Planet for the field portion of their Masters Degree. One of them, Thibaut Bouveroux has published his PhD thesis in April of 2010 on the “Ecology of bottlenose dolphins (Tursiops truncatus) in the seaside resort of Panama City, Florida” with photo ID catalogue for our area. This study was published by the “Universite de Louvain – Faculty of Sciences – Laboratory of Marine Biology (BMAR)

Prepare for your trip